What are the Characteristic Features of Euglenoids? [Detailed] 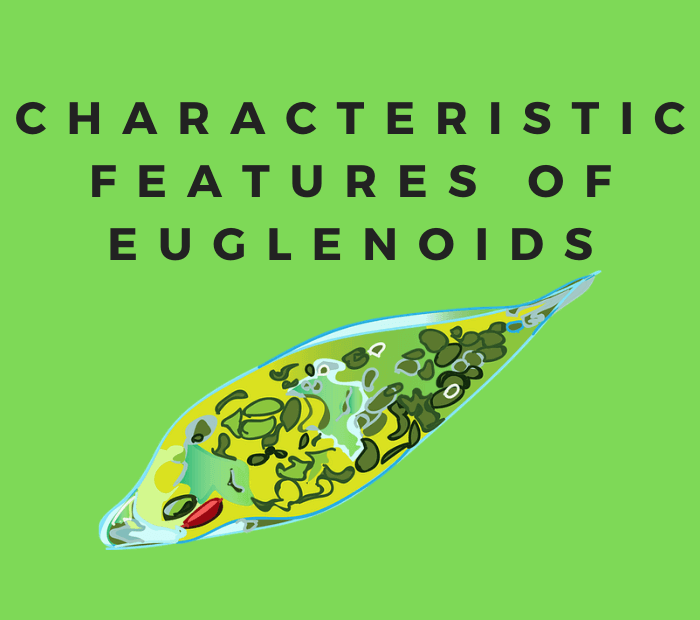 Euglenoids are unicellular flagellate protists. Here I’ll be explaining the characteristic features of Euglenoids in detail including their habitat, structure, mode of nutrition, and examples.

It’s an integral part of the Kingdom Protista in the second chapter “Biological Classification” of Class 11 NCERT Biology from which questions have been repeatedly asked, both in the NEET exam as well as boards.

Previously euglenoids were placed in the plant kingdom due to their photosynthetic ability. But due to the absence of cell walls and animal-like nutrition, some scientists placed them in the animal kingdom. But now according to five-kingdom classification, they are included in protista.

Euglena is a connecting link between animals and plants. It resembles the ancestral form from which the plants and animals evolved.

The body is covered with pellicle, a small cytostome (cell mouth) and cytopharynx is present at the anterior end of the body.

Euglena is a free-swimming flagellate with two methods of movement:

(i) Euglenoid movement by contraction and expansion of the body (wriggling movement).

Euglena contains chlorophyll, yet it resembles animals because it feeds like animals in the absence of sunlight.

Hope you found it helpful. Comment your suggestions below.