Why are Living Organisms Classified? [Detailed] 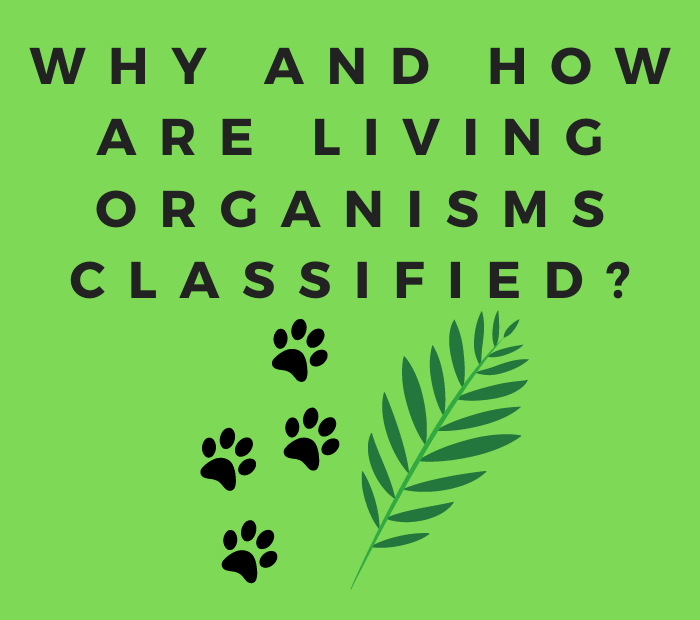 Here I’ll be explaining why living organisms are classified into suitable categories and sub-categories. Because of the vast diversity of flora and fauna, classification becomes necessary for a better understanding and study of the various life forms on Earth.

It’s the first question in the chapter “The Living World” of Class 11 Biology NCERT. This article will provide you a to-the-point answer which will help you in your boards or NEET exam preparation.

Why are Living Organisms Classified?

The living world is very rich in variety. Millions of plants and animals have been identified and described (the number of species that are known and described refers to biodiversity and it ranges between 1.7 to 1.8 million) but a large number still remains unknown.

Living organisms are classified because it is nearly impossible to study all the living organisms on the planet. It is necessary to classify them into categories on the basis of some easily observable characters.

Classification helps to study the enormous diversity of living organisms easily. It also helps to understand the resemblances and relationships among different groups of organisms.

In order to facilitate the study of the diversity of organisms, biologists have evolved certain rules and principles for identification, nomenclature, and classification of organisms. The branch of knowledge dealing with these aspects is referred to as taxonomy.

Taxonomy is a branch of biology that deals with the characterisation, identification, classification and naming or nomenclature of living organisms.

A large variety of plants, animals, and micro-organisms are found on the planet earth and they range in terms of size, colour, habitat, physiological and morphological features. Studying each individually is time consuming and impractical.

The process by which anything is grouped into convenient categories based on some easily observable characters is known as classification. It involves identifying distinctions among organisms and placing them into groups that reflect their most significant features and relationship.

The taxonomic studies of various species of plants and animals are useful in agriculture, forestry, industry, and in general for knowing our bio-resources and their diversity.

Classification is not a single step process but involves a hierarchy of steps in which each step represents a rank or category (unit of classification). These categories/ranks are generally referred to as taxonomic categories or taxa. All the categories together constitute a taxonomic hierarchy.

An organism represents/occupies a place or position in the system of classification. The purpose of biological classification is to organise the vast number of known organisms into categories that could be named, remembered, and studied. Classification is important as it aids in making the study of the various living organisms easy and organized.

How are Living Organisms Classified?

The basics of taxonomy like identification, naming, and classification of organisms are universally evolved under international codes.

Organisms can be grouped into categories, called taxa, and representatives from each taxon are studied.

Any category or unit of classification that represents a rank is known as a taxon and all the taxonomic categories together constitute the taxonomic hierarchy.

Modern taxonomy of organisms is based on the knowledge of the following:

Basically, it is the framework in which the taxonomic groups (taxa) are arranged in a definite order, from higher categories to lower categories (descending order).

There are 7 main taxonomic categories. They are obligate or essential or broad categories:

All the members of a taxon have similar characteristics, which are different from that of other taxa.

As we go higher from species to kingdom, the number of common characteristics decreases.

The lower the taxa, the more are the characteristics that the members within the taxon share.

The higher the category, the lesser will be the number of similar characteristics of organisms belonging to that category.

Taxonomic studies consider a group of individual organisms with fundamental similarities as a species. One should be able to distinguish one species from the other closely related species based on the distinct morphological differences. Species are the basic unit and lowest category in classification.

Genus comprises a group of related species that has more characters in common in comparison to species of other genera. Each genus may have one or more than one specific epithet representing different organisms, but having morphological similarities.

(Makoi) are three different but related species. Hence they all belong to the same genus Solanum.

Family comprises a group of related genera with a still less number of similarities as compared to genus and species. Families are characterised on the basis of both vegetative and reproductive features of plant species but reproductive or sexual or floral characters are used mainly.

For example, three different genera Solanum, Petunia, and Datura are included in the family Solanaceae.

Order has a group of related families with still a less number of similarities as compared to family, genus, and species. Order being a higher category is the assemblage of families which exhibit a few similar characters only.

For example, plant families like Convolvulaceae, Solanaceae are included in the order Polemoniales mainly based on the floral or reproductive or sexual characteristics.

Division includes all organisms belonging to different classes having a few common characters. It is a taxonomic category between kingdom and class. In plant kingdom, division is the category equivalent to phylum.

NOTE: Order and other higher taxonomic categories are identified on the basis of aggregates of characters.

This system of classification is the oldest and it was suggested by Carolus Linnaeus in 1758. He divided the living world (organism) into two kingdoms, Plantae (for all plants like trees, shrubs, climbers, creepers, moss, and floating green algae) and Animalia (for animals).

Ernst Haeckel, a Gennan biologist, and philosopher, suggested a third kingdom Protista in 1866 for:

(1) Unicellular organisms such as bacteria, protozoans, and acellular algae.

(2) Multicellular organisms without tissue such as algae and fungi.

It was proposed by Copeland in 1956. The two additional kingdoms were Monera for the bacteria and blue green algae and Protista for protozoans, algae, and fungi.

R.H. Whittaker, an American taxonomist. He proposed a five kingdom system of classification in 1969.

Hope you found the article helpful. I’d love to hear your thoughts in the comments section!