Why are Classification Systems Changing Every Now & Then? [Detailed] 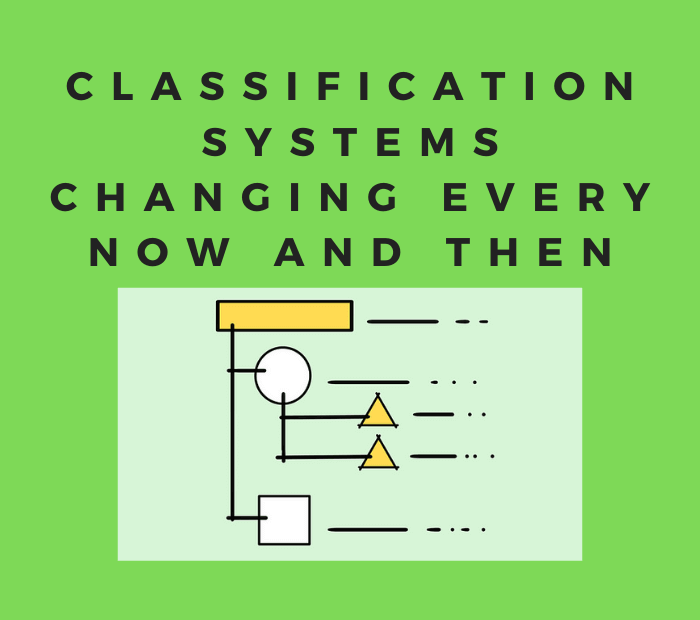 Here I’ll be discussing why classification systems are changing now and then. Moreover, I will also be explaining how these systems have undergone several changes over a period of time.

It’s an important question of Class 11 Biology NCERT. This article will provide you a to-the-point answer which will help you in your boards or NEET exam preparation.

What is Biological Classification?

The art of identifying distinctions among organisms and placing them into groups that reflect their most significant features and relationship is called biological classification.

Scientists who research, study and contribute to the classification of living organisms are known as systematists or taxonomists.

Why are Classification Systems Changing Every Now and Then?

Millions of different species of plants, animals, bacteria, and fungi are found on Earth, an array of incredible life. Earth’s biodiversity is so rich that many species are yet to be discovered. Hence, to classify these new undiscovered species into convenient categories (based on distinctive characteristics), the existing classification systems need to change every now and then to accommodate the newly discovered species.

Initially, classification was based on only external morphology and organisms were grouped in two categories – plants and animals.

As newer tools and technology were available, more in-depth studies followed like anatomy, cell biology, embryology etc. The similarities and differences of organisms were studied at all these levels and accordingly the classification was modified. With more information and details available, classification is changing every now and then.

The science of classification, taxonomy keeps undergoing frequent changes despite existing for ages. Every now and then, scientists are finding new information and facts which need to adhere to the current classification system of species, both old and new.

One of the new reasons why species are being constantly re-evaluated is because of the advancements in DNA analysis. Discovery of DNA technology has allowed scientists and researchers to re-examine and re-analyze the relationships between the various different living organisms in order to refine their classification systems.

Information from DNA analysis can change our belief as to how closely two species are related and consequently, their classification can change correspondingly.

Classification has historically focused on grouping living organisms mainly on the basis of shared characteristics and does not inevitably tell how the various groups relate to each other from an evolutionary perspective.

As new discoveries take place, changes and alterations must be made because recent DNA analysis have found that some earlier phylogenetic classifications did not align with their evolutionary past. Phylogenetic trees are assumptions and are modified as and when more data becomes available.

FUN FACT: Bananas share around 60% of the same DNA as human beings. Shocking, isn’t it?

Different systems of classification have been proposed from time to time and have been divided into 3 basic categories: Artificial, Natural & Phylogenetic systems.

Aristotle: classified animals on the basis of habitat into water, land and air.

Theophrastus (370 B.C. to 285 B.C.): In his book De Historia plantarum, he classified about 500 kinds of plants into four major groups; trees, shrubs, sub shrubs and herbs.

John Ray: He was a British botanist who published three volumes of his work Historia Generalish Plantarum consisting of improved classification originally proposed by him in Methodus Plantarum Nouen. He was the first to divide the groups herbs, shrubs and trees into Dicots and Monocots on the basis of the presence of two or one cotyledons respectively. He coined the term species.

Carolus Linnaeus: Also known as the Father of taxonomy. He was a Swedish botanist, who published an artificial system of classification based exclusively on floral characters. Linnaeus published several manuscripts including Hortus cliffortianus and Genera plantarum (1737). In his Genera plantarum he listed all the plant genera known to him. He published his best known Species plantarum in 1753 in which he listed and described all species of plants known to him. He established binomial nomenclature.

Carolus Linnaeus: The first natural system of animal classification was developed by Linnaeus in his book Systema Naturae (10th edition 1758). Improvements were subsequently made by Haeckel (1864) and Lankester (1874).

George Bentham (1800-1884) and Joseph Dalton Hooker (1817-1911): These two English botanists classified plants based on original studies of specimens. They published their well known scheme of classification in Genera plantarum (1862-83). This system of classification is still regarded as the best classification, especially from the practical point of view.

A.W. Eichler (1839-1887): A German botanist who proposed a phylogenetic system of classification and published in the third edition of Syllabus der vorlesungen (1883).

Adolph Engler (1844-1930) and Karl Prantl (1849- 1893): These two German botanists classified plant kingdom on the basis of their evolutionary sequences. They started with simplest flowering plants and ended with plants of complex floral structures.

C.E. Bessey (1845-1915): He classified flowering plants on the basis of their evolutionary relationships.

John Hutchinson (1884-1972) : A British botanist published his phylogenetic system of classification in The Families of Flowering Plants.

Armen Takhtajan (1980): A Russian botanist who published his system of classification in Botanical Review.

Arthur Cronquist (1981): Published his classification in An Integrated System of Classification of Flowering Plants.

Phylogenetic systems of classification for animals given by Dobzhansky and Mayr.

The term new systematics was proposed by Sir Julian Huxley in the year 1940. In the new systematics, the species are considered related to one another, mutable and the work of gradual modification. This is in conformity with the facts of evolution.

There are several forms of new systematics:

The five kingdoms are Monera, Protista, Fungi, Plantae and Animalia.

Based on the following five criteria:

(2) Complexity of an organism’s body.

Hope you found the above article helpful. Read the latest ones here!