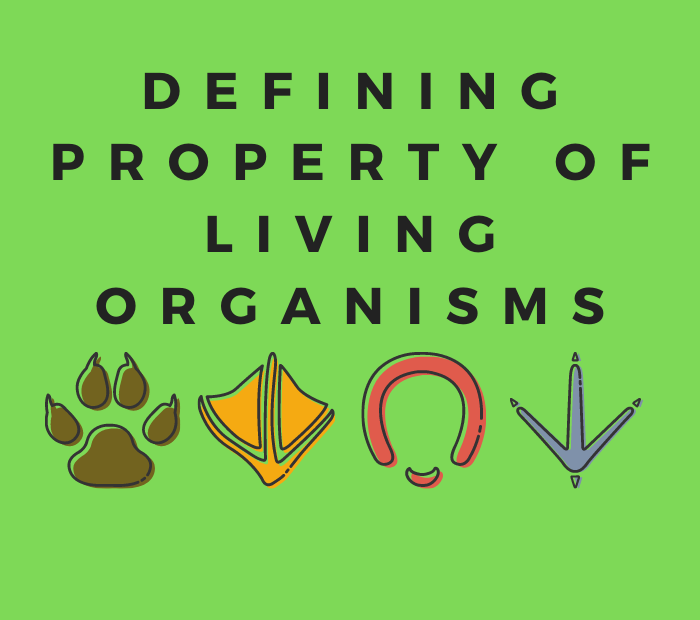 Here I’ll be explaining the defining properties of living organisms in detail, these characteristic features are the ones that differentiate the living from the non-living.

It’s included in the first chapter “The Living World” of Class 11 NCERT Biology which is also repeatedly asked in NEET exam as well as boards.

When we try to define the term ‘living’, we look for certain distinctive characteristics exhibited only by living organisms. Such characteristics or properties distinguish the living from the non-living. They include:

Let’s cover each feature in detail.

Growth is one of the most important characteristics of living organisms.

For example, kittens grow into cats, puppies grow into dogs and a human baby grows to become an adult.

Growth is defined as an irreversible increase in mass and an increase in the number. These are the twin characteristics of growth.

An increase in mass refers to an intrinsic increase (increase in the protoplasmic matter of the cell) and an increase in number is by the cell division.

Growth is the result of metabolism when the anabolic (synthetic) processes are more than that of the catabolic (destructive) processes in an organism.

If we consider only an increase in mass as growth, non-living objects grow too. This type of growth where there is an accumulation of material on the surface is known as extrinsic growth. (example: mountains, boulders, and sand mounts).

Growth in animals is a determinate type of growth (limited), it occurs only up to a certain age. However, cell division occurs in certain tissues to replace lost cells.

Production of new individuals or progeny is known as reproduction.

Reproduction is the only way that living things can perpetuate themselves. It is one of the most important life functions.

True regeneration is seen in planaria or flatworms where a fragmented organism regenerates the lost part of its body and becomes a new organism.

Fragmentation is seen in fungi, filamentous algae, and protonema of mosses.

In multicellular organisms, reproduction mostly refers to sexual reproduction; some of them reproduce asexually as well.

Reproduction is of two types:

By Asexual spores: Algae and Fungi

By Budding: Yeast and Hydra

By Fragmentation: Filamentous algae, Fungi and the Protonema of Moss Plants

NOTE: Regeneration (Epimorphosis type) is a process in which only the lost part of the body is repaired or regained. Seen in Starfish and Lizard.

Reproduction cannot be considered an all-inclusive defining characteristic of living organisms, because of 2 main reasons:

The sum total of all the chemical reactions occurring in a living cell/organism is called metabolism.

All living organisms (unicellular and multicellular) exhibit metabolism without any exception.

Hence, metabolism is considered a defining property of living organisms. Since metabolism occurs only inside the cells, the cellular organisation of the body is also a defining feature.

A cell is the basic unit of life. All living organisms are composed of cells.

Unicellular organisms are capable of independent existence and performing essential functions of life.

Anything less than a complete structure of a cell does not ensure independent living. Hence, the cell is the fundamental, structural, and functional unit of all living organisms.

Hence, the cellular organisation is a defining property of all living organisms.

It is the ability of all living organisms (prokaryotes or eukaryotes), simple or complex in organisation, to sense the conditions in their surroundings or environment and respond to these stimuli, which may be physical, chemical, or biological.

Consciousness is the most obvious and technically complicated feature of all living organisms.

We sense these physical, chemical or biological stimuli through our sense organs.

Plants also sense and respond to external factors like light, water, temperature, humidity, etc in a variety of ways by increasing and decreasing their rate of transpiration, opening and closing of stomata, or by turgidity and wilting, etc.

All organisms, from prokaryotes to eukaryotes show consciousness to environmental cues.

Therefore, consciousness is a defining property of all living organisms.

NOTE: Human beings are the only organisms that have self-consciousness (is aware of himself/herself). This is due to their well developed nervous system and communication skills.

Humans are very fast to respond to external stimuli and even think or predict possible changes in the surroundings to prepare themselves.

In the hierarchy of organisational complexity of organisms, the property of the living organism is due to the interactions occurring at the organ system, organ, tissue, and the cellular level. In conclusion, we can say that living organisms are self-replicating, self-regulating, and evolving interactive systems that are capable of responding to external stimuli.

Hope you found it helpful.

You know what time it is?

It's time to get productive.