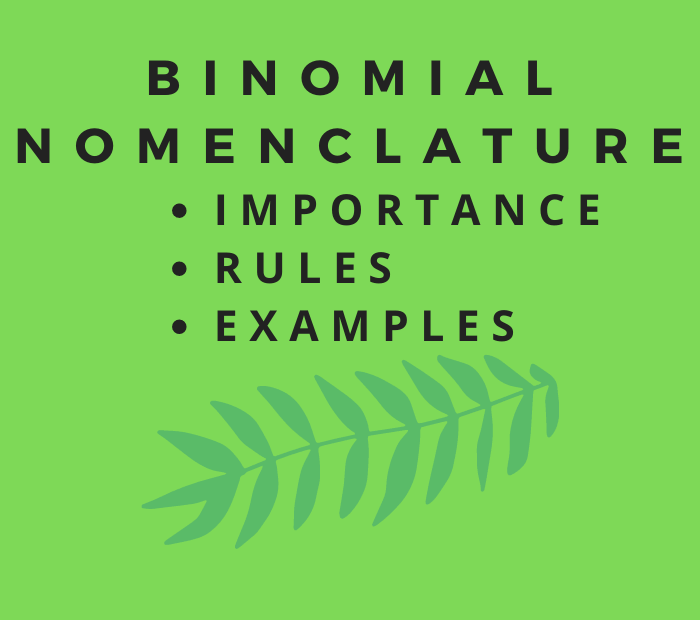 Here, we will be discussing Binomial Nomenclature, its definition, rules, and importance along with a few examples. It is an integral portion of the first chapter of class 11 NCERT Biology “The Living World” which will help you in your NEET exam or boards preparation.

Why is Binomial Nomenclature important?

Common names aren’t unique, unlike scientific names. Hence, the use of common names can lead to great confusion and conflict as to what animal or plant is being referred to and what is its relationship with other plants or animals.

Obviously it is not possible to identify the enormous number of living organisms based on their common/vernacular/local names hence scientific names are given to them.

Binomial Nomenclature is important because it allows people from all over the world to communicate unambiguously about the various plant and animal species. Also, it makes sure that every scientific name is unique.

For example, if tigers are given the scientific name Panthera tigris, no other animal species can be given the same exact name.

So, if you are an Indian scientist studying the relatives of tigers and you wish to discuss it with an American scientist, both of you can use the scientific name to address tigers. This way, you will know exactly what the other person is talking about and vice versa.

Scientific names of a particular plant/animal also tell us about its relationship with other plants/animals.

In the genus Panthera, there are other species as well. For example,

All of these species share the same generic epithet (name of the genus), this indicates that they’re closely related to each other.

Nomenclature is the assignment of distinctive names to each species.

For example, Ipomoea batatas (sweet potato) is called Shakarkandi in Hindi, Meetha aloo in Assamese and Bengali, Cilagaḍadumpa in Telugu, Ratāḷē in Marathi and Sihi ālūgeḍḍe in Kannada.

Similarly, the common house sparrow is called Goraiya in India, Sparrow in England, and Haussperling in America.

The earliest scientific names were polynomial and were composed of many words (which gave the characteristics of plants).

Such long names were of course very difficult to remember. Hence, to make things easier, a binomial system of nomenclature was introduced soon after.

Linnaeus proposed the scientific names of plants in his book Species Plantarum which was published on 1 May 1753. So this was the initiation of a binomial system for plants (Note: any name proposed for plants before this date is not accepted today).

Linnaeus proposed the scientific names of animals in his book Systema Naturae (10th edition). It was published on 1 August 1758. So initiation of a binomial system for animals is believed to have started then.

According to this system, the name of a plant or animal is composed of two Latin (or Latinised) words. They are derived from Latin irrespective of their origin. For example,

Each name has two components, the generic name, and the specific epithet.

The first word indicates the name of the genus (also called generic name).

The second word denotes the name of the species (also called specific epithet).

The generic name always begins with a capital letter and the specific name with a small letter.

Both the words, when handwritten, are separately underlined and they’re printed in italics to indicate their Latin origin.

The generic and specific names always have some meaning. They are based on some special characters of the plant and animals, or the name of any scientist or on some legend.

Usually, the name of the author, who names the organism, is also written in full or in abbreviated form after the specific name. The name of the scientist should be neither underlined nor in italics, but written in Roman letters (simple alphabets).

Thus, in the case of Mangifera indica L., the L. stands for Linnaeus, and in Lychnis alba Mill., the Mill. stands for Miller.

Sometimes a single species is described under different names by different authors. These names are called synonyms. In such cases, the name under which the species is first described is considered to be valid.

Trinomial nomenclature is basically an extension of Binomial nomenclature. Certain species can be divided into smaller units, called subspecies or varieties, on the basis of finer differences. The name of the variety is written after the specific epithet. Thus, the name may become a trinomial or a three-word name.

According to this system, the name of any organism is composed of three words:

Anyone can study, describe, identify, and name an organism provided he/ she follows certain universal rules.

The codes help in avoiding errors, duplication, confusion, and ambiguity in scientific names. They’re established and improved upon at the International Botanical and Zoological Congress held from time to time.

The names of bacteria are decided by the International Code of Bacteriological Nomenclature (ICBN).

The names of viruses are decided by the International Code of Viral Nomenclature (ICVN).

Similarly, there is a separate International Code of Nomenclature for Cultivated Plants (ICNCP).

If both generic and specific names are the same, these are called tautonyms. In plant nomenclature, tautonyms are not valid. Generic name and specific epithet should not be the same in plants.

But tautonyms are valid in animal nomenclature. For example,

Hope you found it helpful.

You know what time it is?

It's time to get productive.