What is the Nature of Cell Walls in Diatoms? [Detailed] 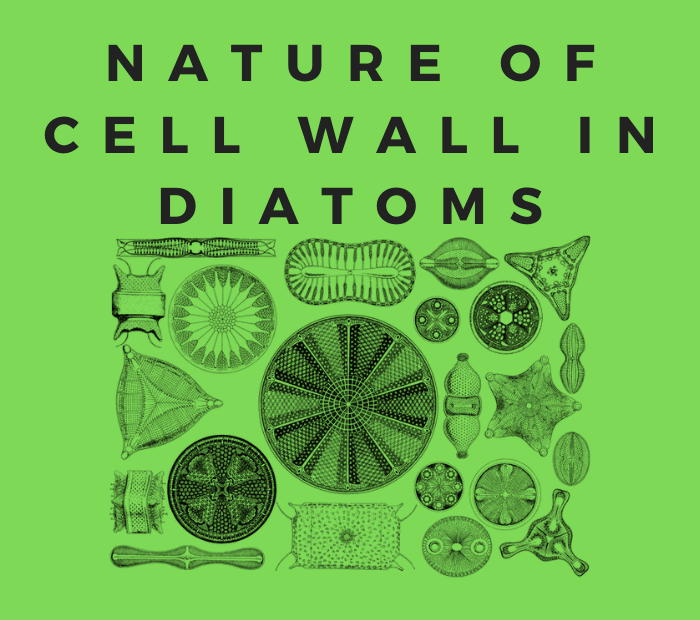 The cell walls of diatoms are embedded with silica and form two thin overlapping shells, which fit together as in a soap box. Here I’ll be explaining it in detail and also highlighting their general characteristics.

It’s an important topic in Class 11 Biology NCERT and comes under Chrysophytes in the second chapter “Biological Classification”. This article will provide a detailed to-the-point answer as to what is the nature of cell walls in diatoms. It will surely help you in your NEET exam or boards preparation.

As we know, Kingdom Protista consists of single-celled eukaryotes. Protists are classified into 5 subdivisions:

Let’s go through the nature and structure of the cell wall in diatoms and then discuss some general features of Chrysophytes.

Nature of Cell Wall in Diatoms

The cell walls of diatoms are called frustules or shells and are chiefly composed of cellulose impregnated with glass-like silica in large quantities. The nature of the structure is such that it forms two thin overlapping halves (or theca) that fit together like two parts of a soap box. The upper half (lid) is called epitheca and the lower half (case) is called hypotheca.

Because the walls are embedded with silica, they are hard and indestructible in nature. Thus, diatoms leave behind large amounts of cell wall deposits in their habitat and this accumulates over billions of years.

The cell walls do not get decomposed even after the death of the diatoms therefore at the bottom of the water reservoir, huge rocks of dead diatoms are formed which is known as diatomite or diatomaceous earth or kieselguhr. Being gritty this soil is used in polishing, filtration of oils, and syrups.

Hope you found this article helpful. Read the latest ones by clicking here!